The Bee Gee’s on PBS TV recently reminded me of Clive Davis’s impression of sounding like they had all been castrated! Ouch! Voices pitched that high are not usual. I was never a fan and remember vividly the “four on the floor” disco soundtrack. Once “Saturday Night Fever” hit the Bee Gees were everywhere. The PBS special was a 1997 concert in Las Vegas at the MGM Grand. To their credit everything was live with an excellent band and the singers were all singing….no lip-synching, no auto-tune. And performing with precision. The program consisted of hits from 30 years prior, and they kept on coming. Obvious influences from R&B, Country, Irish, and Beatles were very evident in their catalog.

The interesting thing about the disco beat is with a good rhythm section it’s a lot of fun for the drummer. I remember doing a lot of disco playing and if I didn’t hold back, the momentum would take off. The time would rush and the tune would begin to accelerate. If there were dancers they ended up in a marathon race. But when the players were on, the music would groove. The drum and bass parts eventually became predictable and metronomic resulting in the “click track era.” For many drummers doing pop music, this was a dismal time. Not only were you relying on a click track, you were beginning to compete with the drum machine. If the drum part was straight 8th notes and very few changes, why not use a machine that does it exact every time? And save money!! Just so happens creative players cut through and were still in demand; as always.
Mel Lewis came into Drummers World one early afternoon laughing to himself. “What’s so funny Mel?” “I just left a record session and there were some tracks being done with a drum machine. The machine broke down and they wasted a couple of hours trying to get the machine up and running again. When they hire Mel Lewis they get Mel Lewis, not a machine!” He loved the idea of the robot breaking down. The machine could not produce the sound and feeling he projected.

Now drummers have become accustomed to working with click tracks and the fear and stigma once associated with them is no longer an issue. When I began studying drums I was encouraged not to rely on the metronome; not to be a slave to it. Today more and more players use it as a tool and develop creative ideas with it.

But I digress! The Bee Gees have a sound; Copland, Coltrane, Emmylou, The Beatles, Streisand, Ellington, Mahler, Elvin, Gadd, all have a sound. Often it’s not necessarily the content of the music being performed but the sound itself that hooks us. Is the sound they have innate or is it developed through hard work and practice?? 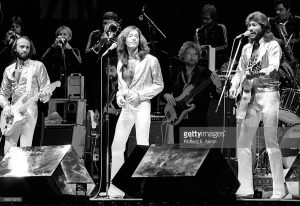 2 Replies to “Nature/Nurture: A Meditation on the Bee Gees”