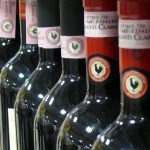 In Italy, there is a myth how the black rooster came to represent Chianti. The story goes back to the middle ages when Florence and Siena were fighting for border control. Siena at the time was very prosperous due to traveling Christians passing through on route to Jerusalem. When the Black Plague came this all ended. The Renaissance followed with new ideas and creativity. Florence and Siena were very competitive with each other so a race was suggested to see who was the best. The race was a black rooster against the white rooster. The white rooster would represent Siena, the black, Florence. Before the race the black rooster was not fed, the white was well fed and full. Because the black rooster was so hungry he was angry and full of energy. The black rooster won the race and became the symbol for Chianti’s victory.

I was reminded of the myth recently when I was running uphill. Being at the bottom of a large incline, I looked upwards; saw this incredible slope and telling myself I will never make it up this climb. I decided not to look ahead. Just run…slowly without stopping. I did it! I ran up the hill and reminded myself, “one step at a time.” Now when I go out to run I try not to look too far in advance.

The practice process is similar. If a piece of music is difficult and challenging, I have learned to approach it a section at a time. Taking on the entire piece is frustrating and debilitating. The slow method is best. Slow cooking! Playing 8th notes evenly at a very slow tempo is much harder than doing them fast. Playing a slow tempo and getting a feel for it is more challenging than up-tempos. I remember a concert with Ray Charles where he played a tempo so slow you could take a nap between 1 and 2…. AND it had feeling.

The black rooster won the race because of the energy he had stored. I can enjoy a glass of Chianti knowing that. Being too full doesn’t win the race.

One Reply to “One Step at a Time”