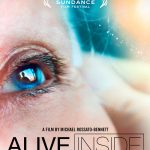 The movie, “Alive Inside” is a journey, a trip to another world. It’s a documentary released in 2014, but received very little distribution and is now available on Netflix. It explores difficult subjects: Alzheimer’s as well as mental and neurological disorders. Subjects many of us shy away from, but need to acknowledge. This movie has interviews with patients suffering from these diseases in nursing homes.

A number of patients could not communicate verbally. They did not respond to questions regarding basic needs (how do you feel? Are you hungry? Etc). Doctors administering drugs saw very little mood or personality improvement. They continued prescribing the drugs with very little effect. The time frame was over a period of years. Then things changed. A new drug was discovered. Patients began smiling, talking, dancing. Their bodies came alive, their eyes lit up. The 90 year old who would/could not speak to anyone would talk. He would dance in his chair and smile. The bipolar woman who would get so depressed and ready to “call it quits,” beamed with radiance and hugged people. The magic drug…music. The patients had been asked their favorite music and given head sets to listen to their choice. The results after only a few minutes were remarkable. The thought had never occurred to the staff at the nursing home to incorporate music in these people’s lives. As musicians we know the power of music.

On a flight from New York to Los Angeles I sat next to a very attractive young lady. Attempting to get to know her I initiated small talk about the weather, movies and easy conversation topics. We transitioned from one subject to another. “What are you going to LA for?” I responded, “A trade show.” “What trade? “ I’m in the music industry.” Short pause and then, “Music? I don’t know anything about music.” At this point I’m puzzled. I ask, “Don’t you listen to music?” “No, I’m not interested in it at all.” Wow! Either she was trying to blow me off or she really wasn’t interested in music. I knew if she had no interest in music I was traveling a dead end road.

We are all responsible. The lack of music programs in the schools has had a negative impact of music appreciation. Many kids think Beethoven is a dog! The movie about a dog named Beethoven is more meaningful to them than the composer. The blame is how our society relegates arts to be unimportant (?). We all need to encourage and support the arts in schools, not because of the financial rewards but the positive effect on brain cells. It has been proven kids develop skills by playing an instrument.

I encourage everyone reading this to watch “Alive Inside.” It will touch you and remind you why music is in your life and how fortunate you are because of it.