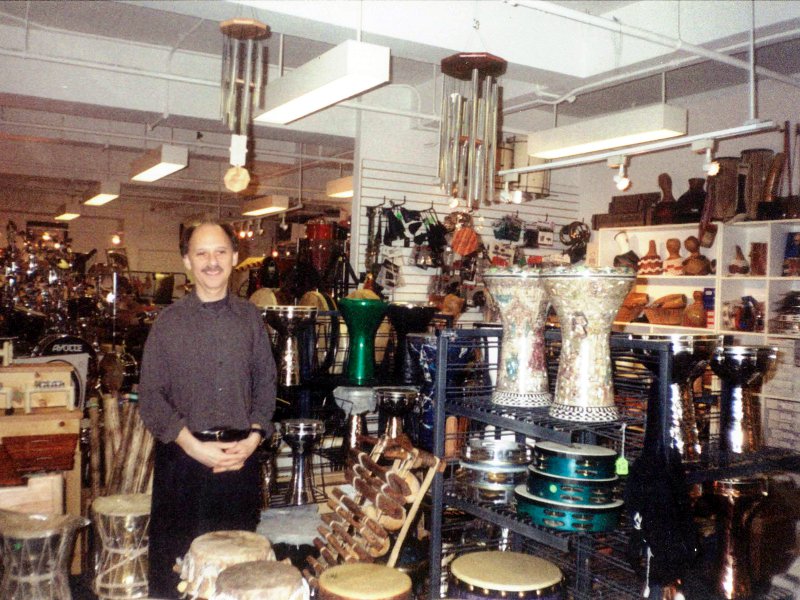 When we started in 1979, the only world percussion drums in the stores were congas, bongos and other latin american gear. Any thing else was a rare oddity. A few Brazilian percussionsts started coming into the shop and after a while convinced me to buy pandieros and tamborims from them when they would return from Brazil. In the early 80’s a very nice gentleman came into Drummers World with a nice djembe drum from Burkina Faso and invited me up to his hotel room to show what other drums he had brought. Djembes were impossible to get and customers were looking for them. Needless to say, I was apprehensive, not knowing him, but a couple of drummers recommended he contact me and I trusted them. I show up at the hotel, knock on his door and am led into two full rooms full of djembes and art works from West Africa. I had never seen anything like it. He was using his hotel room as a showroom and I played one drum at a time choosing the best and most resonating drums I heard. They were all used drums. They had been played in ceremonies and concerts and all had markings. But, they sounded fantastic and I was hooked. After intense negotiating over price I bought 12 and got them to the store the next day. Within two weeks we sold them all. We developed a reputation specializing in world percussion and introduced many new instruments and toys to the playing public. This photo is a reflection of the many instruments we had in stock in 1999.