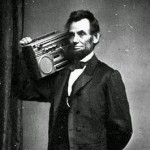 I read an article about anachronisms last week and it caught my attention. By definition, an anachronism is “a thing belonging or appropriate to a period other than that in which it exists, especially a thing that is conspicuously old-fashioned.” An example cited was a sword used for modern warfare. So, how about some current politicians we suffer watching and listening go on about ideas that belong in our grandparents’ generation; much like flying the Confederate flag in South Carolina. Are these anachronisms or belief systems that continue to exist? And what is a “musical anachronism?”

A “hip cornball” describes a musician who plays a certain dated style of music, but performs it in a modern style. For example, a wedding band is performing a Viennese waltz and the drummer playing a Jazz waltz. It is ¾ time, but the dancers can never find “one.”

So, here we are in the 21st Century and the “age of technology.” We are constantly reminded how fast things are changing. Remember when cassettes first arrived and everybody was recording and playing their tapes to no end? When bands rehearsed there was always a tape deck nearby to record mistakes or strokes of genius. (I recently heard a tape of Charlie Parker warming up in a friend’s basement someone had recorded which is a reminder of how present the tape recorder has always been). Cassettes were easy to use, fast rewind and OK sound. Then the CD entered the picture with a pure, clean sound. Everybody left the cassettes and moved on to CD players/recorders. Digital replaced analog and a new technology took over.

The dilemma is as advancements continue the musician/artist is required to study, practice, rehearse and be current. Accepting embarrassing gigs just to pay the rent is not unusual. Meanwhile, the record companies after years of bad behavior have enabled Apple, Spotify, Pandora, etc. to download thousands of hours of music and reward the artist cents on the dollar. We all know what’s going on and it’s not unlike the 30’s, 40’s and 50’s when certain record companies, agents, managers padded their pockets and passed on very little to the artist. This is, to a degree, an anachronism. A similar behavior is occurring now as seventy years ago. Personally, I think it’s time to update to present day. To respect and give the artist their fair share and move out of the past!! Any suggestions??