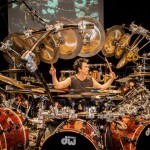 Drummers always want more! It’s the personality type. Aggressive, on top of it, ready to move. They think differently than other musicians. Have you seen Terry Bozzio’s set up recently? How many drums and cymbals does he have? I quit counting after 20. And he plays them all… and brilliantly. OK, keyboard players have a few different set ups as do guitarists, but none come close to Terry’s rig. The opposite is the famous Jo Jones episode at Central Park. The event featuring great Jazz drummers with their bands: Tony Williams, Elvin Jones and a number of top drummers performing in world class fashion. Near the end of the concert, Papa Jo comes out on the stage with no band and no drum set. He walks out carrying, in one hand, his hi hat stand with cymbals and a pair of sticks. He goes to center stage, sits on a stool, and begins playing time on the high hats. This is his music. In a matter of minutes the crowd is on their feet. He is giving everyone a lesson on how to swing and do it with grace.

I have always had a fascination with Thelonious Monk as a person and his music. I invited Arthur Taylor (at one time a member of Monk’s band) to lunch and insist he tell me some Monk stories. The first thing he tells me, in true drummer fashion, is Monk’s reluctance to give him solos when they performed. Being in the band six months or so and never having a solo spot completely deflated his ego. He traded 4’s and 8’s but never anything more. His frustrations get to him and as he is talking to Monk and insisting on a solo, he sees Monk listening but never responding with a “yes” or “no.” A few days later the Quartet is performing at a sell out concert in Philadelphia. SRO! Lines around the block to get in the venue. The band kicks off the concert with a medium tempo tune, their normal opener. Next, a more up-tempo is played. After the melody is stated, Monk arises from the piano bench and discreetly waves the entire band to stop playing and points to the drums.

The moment of truth has arrived. Art begins his solo. The entire band proceeds to walk off the stage. Art is finally getting his requested, well- deserved solo. He’s excited that Monk did respond to his request. He begins building and building a solo based on the tune they are playing. He is showing the packed house he deserves this solo and is delivering. And is delivering. After 12-13 minutes he is played out. How long can you keep a drum solo interesting? The ideas are no longer happening and physically he is beyond exhaustion. He is sweating profusely. Where the hell is the band?? No one is in sight. Where did they go? He continues to explore but has had it. A few minutes go by and he eventually sees the saxophonist, Charlie Rouse, standing to his right off stage. He signals to Charlie,” Help me I’m dying out here.” Slowly, Charlie ambles back on stage and one person at a time joins him. Finally, Monk, smiling, sits at the piano and the band begins to play. Needless to say, Art Taylor never asks Monk for a solo again.

Give the drummer some, but not too much. Less is More!