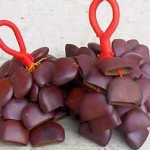 Seed rattles are found in many parts of Africa. Togo seeds are ubiquitous in Africa and are used for many different things. The shells of selected Togo seeds are used in the construction of these rattles. Togo seed shells are also used for holding keys, for necklace pendants, and these very-loud rattles are used worldwide as noisemakers to cheer on athletes at sporting events.

Togo seeds grow on trees in the rainforests of various regions of Africa. In west African tropical rainforest regions (where these grow), they’re normally harvested in the dry season, which lasts about three months. Skillfully assembled by enterprising people, they represent a sort of local currency and they are one of our most popular items. When we say loud, we mean loud, however the proportionately thin shape of Togo seeds give this instrument a particular timbre that is quite unique among seed rattles. Sold as one bunch which consists of 60 togo seeds. 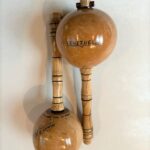 Imported from Venezuela, the Cross-Stick Maracas made by Maximo Teppa are used for traditional Joropo rhythm performance. These hand-made maracas made by the master craftsman Maximo in Venezuela are played using vertical (up/down) movement. Articulation is precise and very clean. The gourds are hand picked and handles are wood turned. Limited supply.
Price: $120.00
2022-10-11T11:41 by Barry 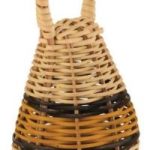 Material: All-Natural materials, Sustainable Wild Banana Tree Seeds, Hard Gourd Skin Base. Tone: Provides excellent rhythmic accompaniment and color. Hand-Woven in Brazil this caxixi is used primarily with Berimbau. The combination of the red seeds striking the gourd-skin base, produces a sharp, high-pitched tone, contrasting the softer, deeper pitch when the seeds strike a woven body. The shape of the handle is designed to be easily played in hand when playing the Berimbau, the traditional Brazilian wooden musical bow.
Price: $36.00
2022-02-17T13:09 by Barry 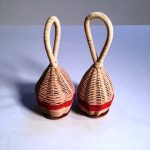 Caxixi (ka-she-she) or basket shakers are used with berimbau, for sound effects and as a rhythmic rattle. They are made of wicker filled with seeds. The flat bottom is made of dried gourd. Quality varies and we have found the caxixi hand made by Cabello in Brazil top quality for sound and endurance. Limited in quantity. Made in Brazil. Three sizes available: Small = 7" x 2", Medium = 9" x 3", Large = 12" x 3.25".
Price: from $24.00
2018-01-12T15:10 by Barry