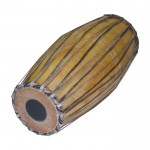 The South Indian Mridangam shell is made from the wood of the Jackfruit tree. The Drum has two opposing heads, bass (approximately 8″) and tenor (approximately 6.5″). Overall length is approximately 22-24″. It is lace tuned. This Mridangam is the principal percussion instrument in South Indian classical Carnatic music. It functions as a solo instrument, as well as an accompaniment for vocals and ensembles.

Compared to the Northern Indian Mridangam, the Southern Mridangam tenor head has a wider outer tonal layer, known as karani. Sliver-thin reeds are inserted between the two layers of the tenor head to create a distinct, buzzed snare sound. A small dough paste is applied on the outside center of the bass head to achieve a low bass tone. There are no tuning blocks, although they can be inserted under the straps to increase the pitch. When played, the drum is held horizontally, and played with the fingers and palms of the hands. 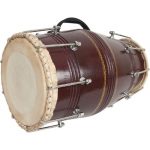 Two-headed wooden dholak drum that is shaped like a barrel with a tenor and bass head. Drum is held horizontally and played on both sides. Heads are held in place and tuned by nuts and bolts. Nuts can be tuned with a standard wrench, included. In India, these extremely popular percussion instruments are commonly used in folk music and during marriage ceremonies. The shells are manufactured in the Northern Indian State of Uttar Pradesh and made with locally grown neem More Info »
Price: $160.00
2021-07-06T17:32 by Barry 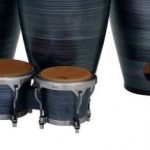 Jesus Diaz Signature Bongos are a combination of innovation by Pearl and Jesus. The bongos are 7" and 8.5" and feature contour rims and buffalo skin heads. The body is made of Thai Oak wood to produce a warm but projecting sound quality. These are professional quality drums and made for the serious player. The finish is Brushed Platinum.
Price: $390.00
2021-02-24T12:38 by Barry 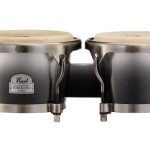 Pearl’s popular Primero Pro Bongos are designed with professional features and even include the same Contour Crown rims found on Pearl's Elite Series bongos. Contour Crown rims feel softer under your hands due to their curved shape. The bongos are 7" and 8.5". The shells are Thai Oak wood which create a warmer, more rounded sound. Finish shown is the Carbon Vapor.
Price: $205.00
2021-02-22T15:49 by Barry