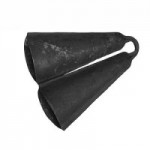 7" Double oval-shaped iron gong/bell are like the Gankoqui agogos but sit side by side. Originating in Nigeria, the Oghene double bells can be used for many styles of music. Hand forged by some of Nigeria's most skillful craftsmen, Oghene offers a unique, resonant and sustaining metallic bell sound. Play it with your fingers, hand, or with sticks. An exceptional percussion instrument, authentic in design, craftsmanship, and sound. Oghene is vital to any performance as it serves as a common More Info »
Price: $27.00
2012-11-24T0:46 by Barry 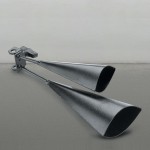 Very traditional in tuning, these Pearl mountable agogo bells are very popular in Samba groups and as a percussion accessory. Two versions are made, this one and a hand-held model.
Price: $33.00
2013-12-27T14:32 by Barry 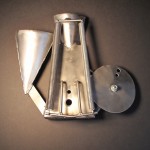 Pete Engelhart began crafting metal percussion instruments after spending time in Brazil in the 1950's. He combined his life long love of jazz, a knowledge of latin rhythms and sounds, and his ability as an artist to produce complicated resonant tuned bells. Pete has now been hand crafting metal percussion for nearly 45 years. He has designed a large variety of highly creative instruments that are now used worldwide by many professional musicians. The Reco-Reco BNC is a combination of More Info »
Price: $135.00
2012-11-27T14:50 by Barry 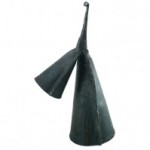 7" Double iron gong with high and low tone (in Brazil this double bell is called an Agogo) traditionally from Ghana. Wood playing stick is included. Gankogui is the name of this double bell or gong. It is constructed from iron. In Ewe music in general, and during Atsiã in particular, gankogui keeps the time. Gankogui is vital to any performance as it serves as a common reference point for everyone in the group - drummers as well as dancers More Info »
Price: $33.00
2012-11-24T0:38 by Barry 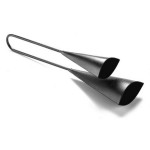 Very traditional in tuning, these Pearl hand-held agogo bells are very popular in Samba groups and as a percussion accessory. Two versions are made, this one and a mountable model.
Price: $28.00
2012-12-20T16:45 by Barry 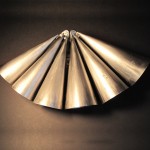 Six heavy gauge metal bells individually tuned. Pete Engelhart originally designed the blossom bells to be hand held and hit against each other to create a church bell effect.  We encouraged him to make them mountable so drumset players and percussionists could use them in their setups.  They have become extremely popular and often players use yarn mallets to get that "ringing" choir bell effect. We've seen them played with fingers, sticks, rods,etc.  They can be hand held and used in More Info »
Price: $265.00
2012-11-24T1:32 by Barry